Beyond the Bio: Alejandra Almuelle Beyond the Bio is a series that takes you past the canvas and into the minds of the artists and curators who build the contemporary arts community.

Alejandra Almuelle was born in Arequipa, Peru. She is a self taught ceramic artist working in Austin for the past 24 years. Before moving to the United States, she spent time with a community of potters in Pizac in the Sacred Valley of Cuzco, a major center for ceramic making in Peru. Peru is a country in which the abundance of clay has made this medium a language of artistic expression. Clay is its own idiom, and being there, she began to speak it. Her work has been featured in the Texas Clay Festival, San Angelo Museum of Fine Arts, MexicArte Museum, Laguna Gloria, Dimension Gallery, among many others.

Her latest body of work entitled “The Silent Narrative of Things” will be exhibited at Dimension Gallery, with an opening reception on May 4th from 7 to 10pm. Public gallery hours will follow on Saturdays and Sundays from 12 to 6pm from May 6th through May 21st. When asked about the significance of this upcoming work, Almuelle reflects…

“When I started this series, I was affected by the significance and probable implications of the political situation. Many questions started to come as the work emerged. Questions created more questions in my attempt to answer them.

‘Seven’ which is the first of the series expresses that state of mind. I have included Spices and Salt as a subtext of the piece. Spice as an undercurrent narrative of human immigration, trade and value. And Salt as a form of currency and power but it is also a fundamental part of the human body. Salt founded civilization and with it commerce. The paradox is that commerce commodifies life itself, a prevalent and entrenched aspect of society.

Each of these human shaped figures are pierced, revealing the interior space through orifices and openings manifesting the permeable nature of the self. A self that is not solid, fixed or contained.

There is also the allusion of story telling in the “1001” installation piece. It brings again the “hole” as part of the piece itself. The existent multiple holes on the brick walls of the gallery are connected by red thread to the needles. It is the eye of a needle that makes the needle.

Visible and invisible, certainty and uncertainty , power and need, It is in between this tension we reside.”

That seems like a simple question that should be easy to answer but it is not. Art for me is a conversation that develops between motivation, uncertainty and its result. Three elements at play. Accepting uncertainty as part of the process of my work –as it is with life –  is something I am coming to terms with. For instance, in my work, I am forced to face and accept variable outcomes. It is a way of letting go.  There is a balance between the control of technique – what you intend – and the variables that emerge in the process, variables such as the subconscious, etc., and this invisible aspect of yourself becomes manifest in the pieces.

Why did you choose clay as your medium?

I chose clay as my medium initially because it was available.  I was surrounded by it. It is everywhere in Peru. I stayed with clay because it is very unpretentious. I love that about it. Clay is vulnerable and it is dirt. It comes from the earth as we do, and we go back to it. How long have you been an artist, and how has your practice changed over time?

I have been working in clay for over 25 years. My work is much more symbolic and abstract now than it was originally.

What are you making now and why?

My current work is being installed at Dimension Gallery. The exhibit which opens May 4th and runs through May 21st, is called “The Silent Narrative of Things,” which poses questions about the effects of Capital and commerce on a single body and the body collective.

What does the Austin arts community need most as the city continues to grow?

Everyone knows that growth is affecting the Arts community is many critical ways. We have been fractured. Fractured by traffic, by gentrification, by the cost of living increase, by the loss of venues and affordable studio spaces. We need to promote more opportunity for collaboration between the different communities that have arisen as a result. 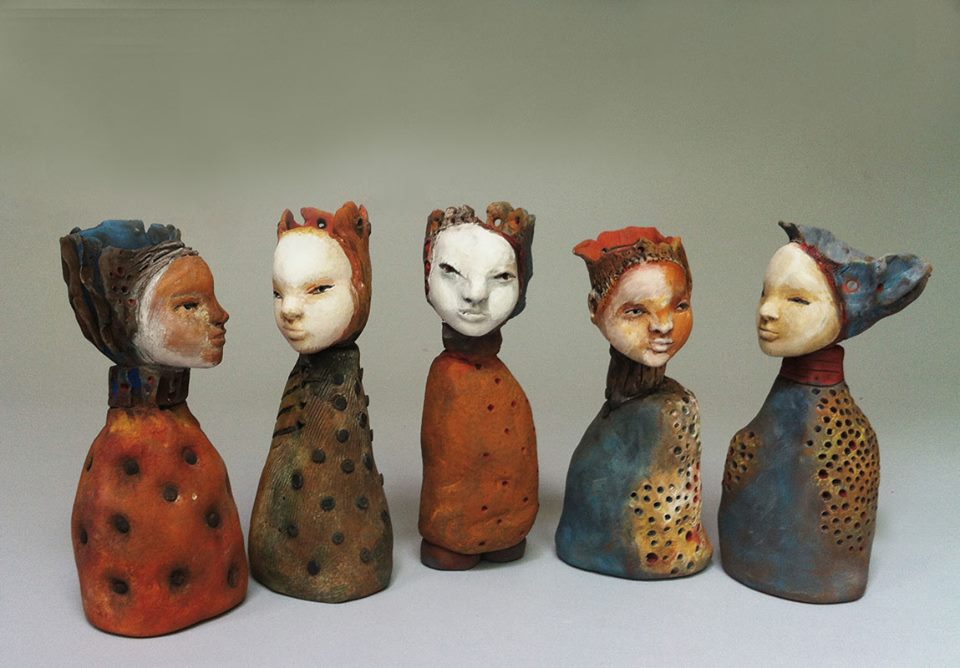 “The Silent Narrative of Things” an exhibition of new work by Alejandra Almuelle opens May 4th at Dimension Gallery; 979 Springdale Rd.