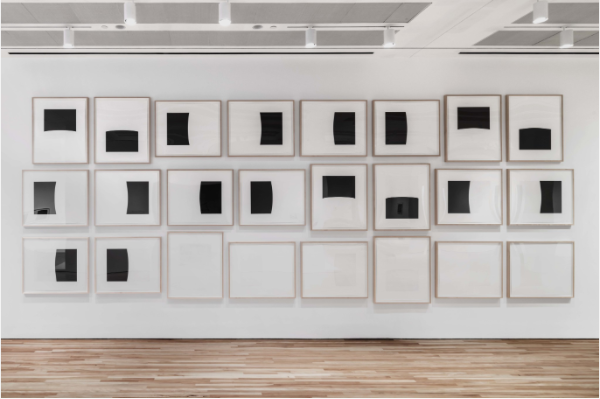 Seventy-six works of art by Ellsworth Kelly have been gifted to the Blanton Museum of Art at The University of Texas at Austin. Sixty-seven of the works are gifts from the late artist and Jack Shear, president of the Ellsworth Kelly Foundation. The remaining works come from the famed television producer and art patron Douglas S. Cramer of Martha’s Vineyard; longtime art collectors Jan and Howard Hendler of Scottsdale, Arizona; Austin-based, internationally regarded collectors and Blanton National Leadership Board members Jeanne and Michael Klein; and businessman, philanthropist, and art collector David G. Booth, also of Austin.

“Not only do these works complement and enhance visitors’ understanding of Austin—now a cornerstone of the Blanton’s collection—but they also help to strengthen the museum’s role as a center for the study and appreciation of Kelly’s work,” stated Blanton director Simone Wicha. “The Blanton is deeply grateful to the individuals, including Ellsworth Kelly and Jack Shear, who are supporting the museum’s ongoing commitment to building a world-class collection of works by Kelly and continuing to celebrate the artist’s great legacy.”

Ellsworth Kelly’s Austin opened at the Blanton in February 2018, and has become an internationally-acclaimed landmark with more than 150,000 people visiting since its opening. This generous group of gifts helps to further establish the museum as a repository for the artist’s work and a center for Kelly studies. Included in the gift are paintings, sculptures, drawings, and prints spanning Kelly’s seven-decade career. In particular, the gift provides additional context for Austin, Kelly’s last work and the culmination of many themes present throughout his career, including the integral connection between his work and architecture and space; an interest in art history, especially Romanesque and Medieval art and architecture; and a career-long exploration of form and color.

A Gift from the Artist
Many of the 67 works gifted to the museum by the artist and Jack Shear relate directly to Kelly’s monumental last work Austin and help illuminate the conceptual and actual origins of the building. Especially significant is an architectural model of the project’s original design from 1986, along with numerous other drawings in which the artist worked out the concept and design in great detail during the mid-1980s. Several works in the gift also date from the formative period the artist spent in France between 1948 and 1954 and include Kelly’s explorations of Christian themes inspired by his numerous visits to churches and cathedrals, such as the early figurative painting Mother and Child (1949). 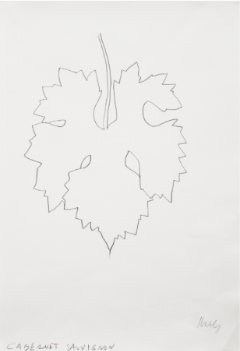 Plant Drawings
The works in Douglas Cramer’s gift are exceptional examples of Kelly’s plant drawings. The drawings are of varietals in Cramer’s former vineyard, which was the original proposed site of Kelly’s design for the structure that would become Austin. “I’m delighted that Douglas Cramer has given us these works that are connected to Austin’s origin and that commemorate his role in this project,” said Wicha.

“Kelly’s plant drawings form a sustained series that span his career, and show how his abstract work was nonetheless deeply rooted in close observation of the natural world. Having these outstanding examples will allow us to share a crucial aspect of Kelly’s creative thought,” commented Blanton deputy director for curatorial affairs Carter E. Foster.

Painting and Sculpture
The Blanton also received as gifts three sculptures and two paintings by Kelly. Jeanne and Michael Klein promised gifts of a bronze sculpture, Untitled (1997–98), and an oil sketch on paper, Red, Green, Blue (1964). Phoenix collectors Jan and Howard Hendler gifted the Blanton two relief sculptures: Grey Panel (1982) and Dark-Red Violet Panel (1982). They are from the limited-edition series of aluminum panels produced by Gemini GEL of Los Angeles,Painted Wall Sculptures (1981–82), and are especially significant as examples of relief sculpture. Similarly, Red Relief with White (2007), a promised gift of David G. Booth, is an example of Kelly’s late painting style featuring multiple joined panels, a format he explored richly in the last years of his life.

Additional Resources
The Blanton is also excited to announce the launch of an in-depth multi-media essay and eight-part video series about Ellsworth Kelly’s Austin, which can be found atkellyattheblanton.org. Authored by Blanton deputy director for curatorial affairs Carter E. Foster, the essay traces the origins, development, and construction of Austin from Kelly’s first encounters with European religious architecture during his travels in France between 1948 and 1954 to the building’s opening at the Blanton in 2018.

As a companion piece to the essay, the video series documents the making of Austin through interviews with key figures involved in the project including Jack Shear, UT Presidents Bill Powers and Gregory L. Fenves, Jeanne and Michael Klein, Judy and Charles Tate, Ralph Coburn, and Douglas Cramer. The videos also share behind-the-scenes footage of fabrication and construction of Austin and its components, such as the handblown glass windows, redwood Totem sculpture, and the exterior’s limestone cladding.

Finally, in summer 2019, the Blanton and Radius Books will publish a book dedicated to Ellsworth Kelly’s Austin. A hardcover version will be distributed by Distributed Art Publishers (D.A.P.), and the Blanton and Radius Books will also publish a softcover version, which will be available exclusively in the Blanton Museum shop. The book will feature an in-depth essay about Austin’s origins and development by Carter E. Foster, as well as extensive photography of Austin.